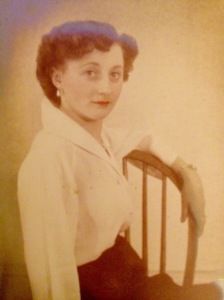 Hello. This is Mike. Auntie Doris’s ruddy stupid nephew. I have not let her manifest herself this week, because I wanted to talk to you without her feeling the need to put her two penn’orth in.
I wanted to talk to you about April May, Doris’s younger sister. Doris has told a few stories about April May in her time, and dropped a few hints too. Half of them are just her blend of fantasy, romance and nonsense. I learned to take everything she says with a pinch of salt shortly after she contacted me from the other side. I expect that anyone who has read much of her ramblings has come to the same understanding.
Doris and I have an agreement by which we change the names and circumstances of many of the people we talk about, to protect the innocent. We have altered the details of some people a lot, and others just a little. April May is our name for a woman called June. (Do you see what we did there?) June is Doris’s younger sister (never mind anything else she might suggest.) She is also my mother.
June shares a lot of characteristics with Auntie Doris; a no nonsense approach to everything, an unwillingness to suffer fools gladly, a determination to do things in her own way, on her own terms, and a brilliant, colourful East Riding of Yorkshire way of speaking, full of quirky phrases and funny put downs. Only the other day, she was telling me that someone was “no more use than a weightless rag.” Brilliant!
She is also similar to Doris in her good humour and real care for people beneath the tough “front.” I told her about my new relationship with her deceased sister, and she enjoyed the humour of it, and loved looking at photographs of Doris’s little ‘clairvoyant performances’ through me, and hearing about, sometimes even helping with the little stories that Doris tells.
Cyril is another character in those stories. He is April May’s husband, and my dad. Cyril is his real name, I couldn’t change that detail. He repaired watches rather than radios and televisions though. And he was no relation to anyone from Doris’s side of the family before he married my mother. But changing his position in the family allowed us to bring his brothers, Bernard and John into the story earlier in the century than would have been possible otherwise.
Cyril met June in 1960, he was a handsome 29 year old with a fashionable brylcreemed quiff, and she was a petite, dark haired beauty who was a star of the ladies darts team at the pub they both drank in. He married her that December, a month or so after her mother died. He then moved into the house that she had lived in since 1945 when she had been ten years old. A house that she has lived in ever since. I am travelling towards that house now, as I write this.
Cyril has lived in a residential home for the past few years. His mind is wandering a bit. More than a bit of the truth be known. Sometimes he is with us in 2014 and June is his wife. Sometimes he is back in the 1940s and June is his mother. Or he could be at any time in between and she could be either, but he still loves her. And she still loves him. Like she has done for the past 54 years. Theirs is an amazing love story, and I am proud to be a witness to it.
June was 79 this year, and even though old, frail and often ill, she has visited him in that home almost every day, often walking the half mile or so, in all kinds of weather. She would have kept him at home and cared for him there if she could have managed to, but she always has been that petite woman, and it takes some strength and effort to look after him these days.
Determined, devoted, good humoured, witty, beautiful, and loving. What a privilege to have a mother like that.
And why am I telling you this? Because I feel that, through my Auntie Doris, you already know something about my family. And because you are the sort of person who reads this far. I feel that I know you. So I want to share things with you.
My mother, June, referred to by her sister as April May, died on Monday morning. She had been ill for some time but was determined to tough it out, carry on as normal, and make as little fuss as possible. She died in that house that she had lived in for 69 years. She died with her daughter Sue (Pamela) looking after her as she has done for a long time now. Of course, I am devastated. But I have special insider knowledge. She lives on, just as my Auntie Doris does, in a better place, where Cyril, Sue and I will see her again someday, before we all move on into The Meld.
I know that this is true. Because Auntie Doris told me. And she wouldn’t go filling her nephew up with a load of old tripe. She’s not that kind of a person at all, deep down.
None of our family are. We just like stories.

5 thoughts on “April May June”