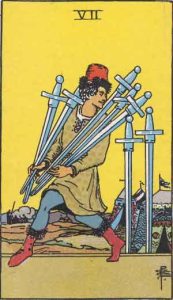 “Thomas and Dulcie Lipp are having a get-together at the other end of the campsite. It’s going to be great fun. They had a big win at the bingo hall and they’ve bought a crate of stout. Arthur Knaggs has brought a tray of pork pies, and Betty Septum has made egg sandwiches. They are going to sit around the bonfire, tell stories and sing songs. Look, if we don’t go, they are bound to be talking about us, so we ought to make the effort. We could take that jar of pickled eggs. We have hardly touched it”

“But what will we do with our swords? We can’t take them, you know what happened last time. The Dollop Twins always get over excited and start throwing their weight around. George Clump ended up in hospital with a nasty cut to his thigh. The doctor said that he might have bled to death if his Nancy hadn’t pinched the wound shut while the ambulance came. Mind you, if I had been her, I wouldn’t have ruddy bothered. Not with the way he was ogling Dulcie’s bosoms every time Thomas’s back was turned.”

“Everyone has agreed to leave their swords stuck into the ground outside their tents. They’ll be OK, it’s a neighbourhood watch area, and besides, crime has actually gone down since the coalition slashed police funding. Everyone knows that. The ruddy Chancellor of the Exchequer said so, and he should know.”

But the picture on the seven of swords shows you what happens if you leave stuff unattended. Some lunatic with a plant pot on his head, or whatever it is they wear these days, sneaks up on tiptoe and runs off with as much as he can carry. I shouldn’t worry too much though. He is probably going to melt them down and beat them into ploughshares or something. Then he will sell them at a car boot sale and use the money to buy drugs. Ruddy kids eh?

If I was him, I would go careful with how he was carrying them though. It looks to me as if he is going to slice his finger ends to ribbons. And it’s a bit ominous how he has left two behind. If the dollop twins grab them and chase after him, it won’t just be his finger ends that get sliced.

Four things that you might do this week: (i) Throw a party. It’s one way to get rid of that jar of pickled eggs you have had in the pantry for over a year. Don’t worry about any side effects. They are pickled. Pickled food lasts forever. If they ever have a nuclear holocaust, everyone will be on an exclusive diet of pickled eggs, and gherkins and stuff. Or they will be once all the tin openers have gone blunt. (ii) Have a game of bingo. But don’t be so stupid as to go doing this stupid internet bingo that’s supposed to be all the rage these days. Get yourself out to a proper bingo hall or social club and have some ruddy fun with real people. Don’t   go taking any swords though. You can leave them stuck into the ground outside your front door or somewhere.  (iii) Be careful handling sharp stuff with your bare hands. My Nephew Michael tried to clear some shoots of bramble out of his garden the other week, with a couple of tea towels wrapped around his fists. He ended up with his hands scratched to high heaven. His Judith has told him he ought to buy a decent pair of gardening gloves, but he ruddy won’t, he doesn’t like gardening, and was only trying to get rid of the brambles to keep her quiet on the subject. (iv) Watch out. There’s a thief about!