The reason that cheese had recently been added to the diet was that my Grandfather had got regular work on the Trawlers, with a captain called Walter who maybe had a bit more skill at finding the fish than some of the others. He would be gone for weeks on end, but more often than not, when the boat came back, it would be loaded with fish and he would have a full wallet with his share of the profits. My mother says that they even got a bit of meat in their sandwiches at those times, but then he was off again, and it would be back to dripping, cheese and jam, and grandmother would smile less often and look a lot more worried.

She had reason to an’all. There were plenty of blokes went out on them trawlers that never came back. People being swept off the decks in storms, and drowned, and other accidents happened quite regularly. There was nothing as bad as what happened that October though. My Grandfather was on the “Mino.” One night, right out in the North Sea, Walter called out”All hands on deck!” Come and have a look at this!” There was a great big battleship, so close to them, they could see the sailors on board it. They thought it was a British one. No other country could build a ship like that, surely. Britannia ruled the ruddy waves, everyone knew that. It had a big searchlight on, and it was sweeping it over the Mino and the other trawlers in the small fleet. My grandfather was grinning with his mates and waving his hat. Then there was a great explosion, and the funnel of the trawler had a ruddy great hole in it! “Ruddy Nora Boys, they’re not firing blanks” Walter shouted and everyone dropped to the floor hoping that they weren’t going to be shot, hoping that the boat wouldn’t sink and hoping that if neither of these things happened that they weren’t going to mess themselves.

Twenty ruddy minutes them warships fired on them little trawlers. The captain and mate of one of them, the “Crane” had their heads blown off, poor fellers. Twenty minutes! Then they stopped firing and buggered off. Apparently, what had happened was that the Russian navy were in a bit of a panic. The Tzar had got them into a war with Japan, and they were not used to actual wars at sea, so they were all messing themselves and trigger happy. They were also all half sozzled because Vodka was, and probably still is, the main way that Russians deal with stress. If they had been sober, things could have been a lot worse for the trawlermen. Things would have probably been better for them too, as the Russian ships did plenty of damage to each other with their wild shooting.

It nearly started World War One ten years early though. The Russians had to grovel to get out of that one. Poor old Walter never recovered from the things he saw, he died the following year. But my grandfather carried on with the trawlers. He had to. His family had developed a taste for cheese. There’s a statue in honour of the captain and mate of the “Crane” and Walter in Hull. At the junction of the Boulevard and Hessle Road, near where my mother was brought up.

Auntie Doris’s top pop hit of 1904: “I Can’t Do My Bally Bottom Button Up” by Ernie Mayne. Music Hall was the magic of the age, and a Ernie Mayne was a big star. A big fat star, who had difficulty getting all his buttons fastened. 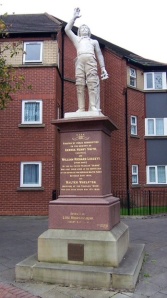