They reckoned on that unemployment was coming down a bit. But they always reckon on that, the ruddy Tories. They don’t mention how many people are doing a few hours a week for next to nowt, and if they didn’t do it they would have refused work, so they would stop their dole money anyway. Either way you have got one less on the unemployed list. Prices were on the up an’all, so if you were working for next to nowt, it wouldn’t buy you much. Not that some of those people off the television could have been short of a bob or two. Surely, if you had your own show on the telly you wouldn’t go hungry, right? So why would Freddie Starr go and do a stupid thing like eating somebody’s pet hamster in a sandwich.
He must have made a fortune off the telly, doing his comedy impression of Hitler with swastika boxer shorts on, and coming up with clever catch phrases like “nick, nick”. Perhaps he thought that taking a bite out of a live hamster between two slices of bread was as hilarious as everything else he did. I suppose it would have been slightly hilarious if he had choked to death on hamster fur, or the poor little thing went to the toilet in his mouth. But I can’t see how it is funny killing a small creature with your ruddy teeth.
‘Course, he says now that it was a publicity stunt drummed up by that Max Clifford bloke. But we all know the sort of things that Max Clifford used to get up to… the filthy so and so. I reckon that the pair of them ought to be ashamed of themselves. People off the television ought to be setting an example to young people, and even if you haven’t actually bitten through a live hamster, you shouldn’t even say you have, because the next thing you know, impressionable young people like that Ozzy Osbourne will be thinking that it is clever to be biting the heads off bats or chickens or something, and even if they didn’t do it, it’s still not ruddy clever. Besides, that Ozzy Osbourne started hypnotising kiddies by putting backwards messages in his records saying things like “worship the devil” and “don’t bother washing behind your ears” and “leaving your shirt hanging out is ok.” It’s no wonder the youth of today are how they are. However they are.
My Raymond would have never bitten a live animal in half. Well, not after he had all his teeth out, any road. And probably not before, but he did bite a fly once. He didn’t mean to though. It flew into his mouth, and he bit it whilst he was trying to spit it out. It had probably flown in because it could smell that he had just been eating some fudge. I used to tell him to keep his mouth closed, but he never listened. Any road I made him swill it out with TCP after he had spat out all the little bits of fly. They are filthy creatures flies, it had probably been wallowing in dog shite before it came to grief in Raymond’s cake hole.
Auntie Doris’s Top Pop Pick of ’86: “Every Loser Wins” by Nick Berry. He used to be in “East Enders” and he played a policeman in “Heartbeat” he was a nice looking lad an’all. I don’t think that that hamster that Freddie Starr bit in half won anything though. Still, it probably passed over a bit quicker than the hamsters that the ruddy Pet Shop Boys got their hands on. Filthy so and sos. 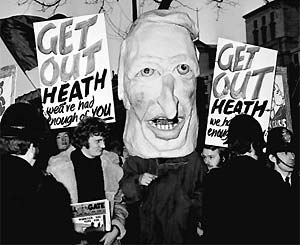 Times got harder and harder. The IRA were stepping up their campaign and setting off bombs in London and Birmingham and even one on a bus near Oldham. The miners were on strike along with what seemed like two dozen other unions. Fuel was getting scarce. Prices were going up and up and up. There were regular power cuts, which left us all in the cold and dark. The shops ran out of ruddy candles! Ted Heath didn’t have a clue what to do! He made it so that people could only work three days a week, which wasn’t too bad, because it meant a four day weekend. He had the telly finish for the night after half past ten, which wasn’t too bad because it was mostly rubbish on after that time any road. But he was floundering, and he had to call a general election.
We ended up with Harold Wilson in charge of a minority government. We had to have another one before the year was out to get enough seats to be properly in charge. ‘Course, he was a sensible bloke and managed to get the miners sorted out by paying them a bit more. Some people thought that that was outrageous, but they were generally the sort of people who had no idea what it might be like to work in a coal mine, and thought that money was an entitlement reserved for clean people with posh accents. In other words, Daily Mail readers.
There’ll always be people who say that the unions ruined the country. That’s just ruddy nonsense. It’s the ruddy Tories that ruined the country, and persuaded everyone otherwise by printing a load of shite in newspapers like the Daily Mail and the Sun.
Hark at me! I’m on my high horse again aren’t I? I can’t help it though. When you have lived through it you can see it happening. I wouldn’t let any other newspaper except the Daily Mirror into my house when I was alive. Well, I had a look at the Morning Star once, but there was no cartoons, no horoscopes and no telly in it. Not even a ruddy crossword. You can’t run a revolution without giving people something to do in their coffee break. You have to give people a glimpse of good things, and I don’t mean the kind of glimpses you get in the Sun. “Show em some pictures of half naked lasses and tell them that people who want to be paid a decent wage for a hard days work are greedy” that’s what the ruddy Sun is all about. And it hasn’t changed much since the 1970s either. They are still peddling the same old nonsense.
I think I had better have a small glass of rich ruby QC and go for a lie down. I might just listen to…
…Auntie Doris’s Topping Pop Tune of 1974: “Seasons in the Sun” by Terry Jacks. Although why that fact that “all the birds are singing in the sky” should make dying any harder. I don’t know. It might be a pleasant distraction if you were listening to one or two birds twittering and chirruping a bit, but a skyful of the little buggers would make a right old racket, and I I was feeling poorly anyway, I’d probably be begging the nurse to switch me off.