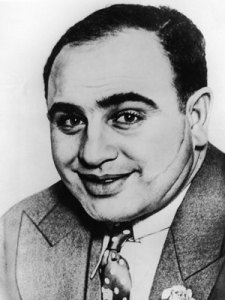 The Saint Valentines Day massacre happened in 1929. In them days, America was more or less ruled by gangsters, because throughout the 1920s they had made booze illegal. Imagine that! During the 1920s it was a crime to have a small sherry, or even a Baileys Irish Cream. Everyone knows that gangsters all love their mothers. Al Capone loved his mother so much that he used to smuggle drinks such as Sherry and Baileys Irish Cream into the country and have ‘speakeasys” –  secret clubs where his mother and her friends could have a drink and speak freely about important matters such as what gauge crochet needles make the best doilies.

Al had a problem though. His arch enemy, Bugs Moran, had found a source of inferior Irish Cream and was watering down sherry to sell in his own speakeasies. He was undercutting Capone’s prices, and attracting more of the nation’s elderly women by also offering exciting new foreign drinks, such as Advocaat and Cherry Brandy. It was the last Straw for Capone, when he found out that his own mother had been to one of Moran’s clubs, and had actually bought a copy of the ‘People’s Friend’ magazine there. (it later turned out that this was not a genuine copy of the People’s Friend, but a crude attempt at copying the publication, produced in a printing works just outside of Detroit.) Capone was so annoyed that he bought a couple of Tommy Guns, and ilured Moran and Six of his gangster friends into a Garage on Valentines Day, and had them shot dead. In cold blood an’all, the ruthless so and so!

Luckily for Bugs Moran, he wasn’t actually there. Capone thought that he was shooting him dead in cold blood, but he was actually shooting Frankie O’Toole, who looked a lot like Bugs, but had a moustache, and walked with a limp. Bugs thanked his lucky stars and went on to have the people who did the Massacre murdered in cold blood. He always left a Valentines card at the scene of the crime an’all. Just so they would know who had done it. He never got Capone although he did accidentally have another gangster Shark Finnigan shot down in cold blood and left with a Valentines card over his heart. Finnigan looked a lot like Al Capone, but had a much bigger nose and a prosthetic arm.

Auntie Doris’s Pop Pick of 1929: ” Happy Days Are Here Again”, by Leo Reisman and his Orchestra. Happy Days didn’t officially return to America until 1933, when the Prohibition era ended, and once again, normal people like you nad me could enjoy a small sherry without listening for the wail of police car sirens. Between 1974 and 1984 actor Henry Winkler celebrated this fact by being completely off his face on Sherry throughout all 255 episodes of the situation comedy “Happy Days”. Bless him.