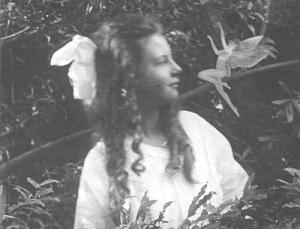 1917 goes down in history for many reasons, the Russian Revolution, America joining the War, and the Royal family changed its name to Windsor. But the most amazing event of 1917 came when two young lasses borrowed a camera from one of their fathers and used it to take a picture of the fairies at the bottom of their garden. And people believed that the pictures were real too! Who could possibly believe that fairies actually exist? Its almost as daft as the idea of the spirit of a dead old lady inhabiting the body of her still living nephew and forcing him to wear her old tights. But that’s not daft. Its ridiculous. I never forced him to do anything, and they are not even my tights anyway. But one person who believed that the pictures were real was none other than Sir Arthur Ruddy Conan Doyle. The inventor of Sherlock Holmes, the most logical and brainy figure in fiction until Gene Roddenbury invented Mister Spock, half a century later.

Conan Doyle persuaded others to believe in those photos too. He even sent some copies to the people at Kodak, who were the world’s experts in photography, and well on the way to inventing the instamatic camera. They verified that there was no way they could have been forged. My Uncle Godfrey already knew that fairies existed. In fact, according to Auntie Beryl, he spent much of his time away with them. The only thing that surprised him about the photos was that they showed the fairies frolicking in a garden with young girls, rather than in a public convenience with middle aged men.

Anyway, when the girls grew into old ladies, which most girls ordinarily do (I know I did), they let it be known that the photographs were indeed forged, in that the fairies were cut out of a picture book, and stuck to card before they posed them for the camera. All but one, which they insisted was a real photo of fairies. So they allowed a little magic to remain, and gave some credibility to those people (long haired hippies) who imagine that they can tell the future with Fairy Liquid. Obviously, anyone with any sense knows that this is ridiculous, as the most effective way to foretell the future events is through Tea bags or Tarot Cards.

Doris’s Pop Pick of 1917 “A Bachelor Gay” by Peter Dawson. How language changes! This jolly song was enjoyed by hundreds, long before the word “bachelor” referred to a member of the singing group who had hits with “Charmaine” and “I believe” or to the manufacturers of “Cup a Soups”. In 1917 “bachelor” quite simply referred to the kind of gentleman who prefers bowling from the pavilion end.