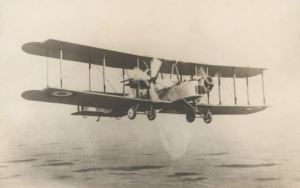 Two weeks later, Major George Herbert Scott flew from Scotland to New York and back in an Airship, in under a fortnight, with a crew, passengers, a stowaway and a ship’s cat on board. Airships were eventually abandoned as an unsafe means of passenger transport, and Scott had gone some way to demonstrating just how unsafe they were, having crashed a few in his time, eventually breaking his own ruddy neck and perishing in the fire after smashing the R101 into the ground in France.

You would never have got me up in one of those things. Or an aeroplane either. Catching a train was stressful enough for me when I was alive. I never wanted to go to America anyway. Or any of those other foreign places that people seem to want to fly to. The most exotic holiday I ever had was in Blackpool, and to be honest my Raymond ruined that for me by constantly leering at all the dolly birds. We were miles happier in our little caravan at Withernsea. No aeroplanes or airships, or dolly birds either. Just a twice daily service bus from Hull, a couple of fish and chip shops and the jolly sound of the foghorns on the North Sea. I honestly can’t understand why Withernsea never really took off as a holiday destination.

Auntie Doris’s Pop pick of 1919: “My Old Man (Said Follow the Van)” by Marie Lloyd. There went the van with her home packed in it. She followed on with her old cock linnet. A lovely song… with the moral that you can’t trust the modern police force.