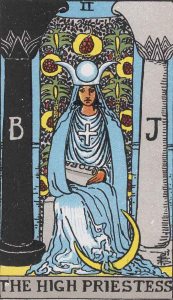 Here she is, in all her glory. A proper lady vicar. With a lovely blue dress on and a moon at her feet. Its a funny old card this one, because it is full of mystery. Is that a crystal ball on her head? Is she reading the script from a 1970’s film about Pearl Harbour? Is she sitting in front of a bath towel with pomegranates drawn on it? Where do you get a beach towel like that? and why is there a B and a J on the columns at either side of her.

It is a persons response to these mystical letters that reveals most about them during a card reading. Most men will instantly suppose that they stand for the phrase “Blow Job” which is apparently a filthy practice that involves a man placing his John Thomas into someone’s mouth. Why on earth anyone would want to carry on like that, the Lord alone knows, but what with men being the filthy so and sos that they are, it is a practice that they spend a lot of time imagining themselves engaging in.

Even vicars. You would think that vicars would know better, but you show a copy of this card to any (man) vicar you like and watch his eyes. You watch his eyes and you will just know that he is thinking about putting his John Thomas into somebody’s mouth. The filthy so and so. He might pretend that he is not and get all flustered and say that Tarot Cards are the work of the Devil or what nots, and advise you to read the bible. But you know what he is thinking about. Which is a shame really, because the letters B and J also stand for “Baby Jesus” which you would have thought was something that Vicars ought to be thinking about a lot more than filthy acts of carnal goings on.

Any Road. If you do get someone who thinks of Baby Jesus rather than Blow Jobs then God Bless them. Unless they are somehow combining the two thoughts. To be honest, there is not a lot that you can do for people like that, apart from maybe splash them with Holy water and hope that it somehow cures them of their wicked ways.

Of Course, if you showed the card to Billy Joel, he would probably not think of filthy sex acts (he’s an innocent man after all) or the infant Christ. He would probably just think of himself, which as far as I know wouldn’t be too unusual for him, but on this occasion would be because he has the same initials as baby Jesus.

(i) Wash your mouth out with soap and water. Particularly if you have been helping anyone to try  out the sordid practice I alluded to above. It might be worth gargling with TCP an’all, just to be on the safe side. (ii) Check out your bath towels. Have you got one with pictures of pomegranates on it? If you have and you fancy selling it, get in contact with me. Even if its not a bath towel. i wouldn’t mind some pomegranate cushion covers actually. (iii) Say a prayer to the Baby Jesus. Worshipping Babies is a good thing. They might not be able to do anything about your prayers, but they are innocent and cuddly. (iv) Have a listen to some Billy Joel. he has a few good tunes. But do you really think that he is all that he is cracked up to be?