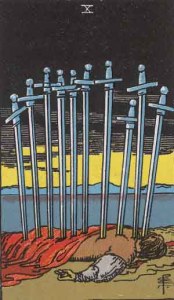 My Raymond was a slave to his lumbago. And I’ll tell you one thing for nothing, back pain is no laughing matter. It  got to the point where he couldn’t get comfortable whatever he did, standing up, sitting down, lying out straight on the bed, or curled up into a ball. It didn’t make a blind bit of difference. He was still in ruddy agony. We tried all the cures: crab paste poultice, vinegar baths, plugging him in to the mains, the lot. He was still in agony but his hair did become thicker and more luxuriant. In the end, he was that desperate that he decided to go and see the doctor.   When he got back, he told me that the Doctor said that there was no hope for him. That the only cure possible cure was whisky, preferably a malt which had been aged in a sherry cask for at least seven years. I wasn’t having any of that. I bought him some extra strength Anadin, and let him have the occasional small sherry with me.

Of course in the olden days when they did the drawings  for these tarot cards, the science of acupuncture was still in its infany. They hadn’t got the hang of using little needles. They used the nearest thing to hand, which in those times was usually swords. If the acupuncturist was a bit heavy handed, the treatment might actually cause more harm than good. It looks like the poor soul on this card has been to see one of them sorts of acupuncturists. It looks like he probably went complaining of earache as well as ruddy backache. Well, one thing is for sure. He won’t be suffering with either earache or backache any more. I think that we can safely say that his suffering has come to an end. And look, the black clouds are lifting, to reveal golden skies over calm waters. The message is clear. All of our troubles will come to an end sooner or later. So there is no point in ruddy well sitting there and moaning about them. You might as well focus on the positives and enjoy yourself.

Four things that you might do this week. (i)  Have a good long soak in the bath. Give yourself a treat, add some vinegar to the water. That’ll soak away most of your aches and pains. Check the bottle first though. Don’t go using that “non-brewed condiment” stuff that they try and palm you off with down at the fish and chip shop. That’s a certain road to genital warts. (ii) Go easy on the analgesics. But if you are taking them and the pain persists for more than two or three days, try taking them with a small sherry. Its easier than trying to ring for a doctor’s appointment at eight o’clock in the morning, when you know that even if you get one, all he is going to do is tell you that its a virus that’s going around, and put you on the haliboranges. (iii) Watch out for these unqualified “quack” doctors and unlicensed practitioners. You can usually spot them a mile off, because they waggle a crystal hanging from a bit of string over you as a part of their diagnosis, Most of them are harmless enough, but if anyone ever suggests that you need acupuncture by sword, get out of the surgery quicksticks! (iv) If all else fails, suffer in silence. Nobody wants to hear about your medical problems. Least of all your doctor. On the other hand. Why not give one of your friends a treat by letting them tell  you about all their little ailments. A good laugh will work wonders, and make your own little twinges seem miniscule by comparison.

I used to smoke forty a day. Without even trying! Players Number Six Tipped. Gorgeous they were. Just hit the spot, and got me moving in a morning (if you know what I mean). And they kept me regular an’all. They helped me with my nerves, helped me to concentrate, and they were good for my lungs too. At least that was the received wisdom at the time that I took them up. Everyone smoked in those days. My Raymond liked the Capstan full strength, but they were a bit too harsh on my throat, ‘cause he used to buy the untipped ones. But these days it seems its all the rage to go giving up smoking. Sticking ruddy plasters all over your arms, chewing gum like a ruddy American Soldier, or sucking on some ruddy thing that you have to plug into your computer to charge it up. What a load of nonsense. If you want to stop smoking, you want to stop smoking, not faff about with gimmicks and gadgets.

I stopped smoking on the day I died, and I haven’t touched a fag since. Not even when I have been manifesting myself through our Michael’s body. That’s eighteen years smoke free and counting. Of course, you might think that popping your clogs is a bit of a drastic measure. But it ruddy well worked for me.

My Uncle Godfrey went to see a Chinaman when he wanted to pack in the fags. The Chinaman laid him out on a table and stuck ruddy pins in him. He stuck them in his forehead, behind his ears, in his arms, in the crook of his elbows, behind his knees, all over the place. He finished off by sticking one in each of his ruddy nipples1 Right in the middle of each of them, on the little bumps. Apparently Uncle Godfrey never touched a fag from that day on, but he went back to see the Chinaman on a regular basis, and if you ask me, he got a lot more stuck into him than ruddy pins. Sometimes he even used to walk funny when he came out.

My sister Pearl tried to stop when her little Walter started asking her what she smoked for. She said it broke her heart, thinking of him growing up, getting hooked and wasting all his money on ciggies. She used to put the money that she would have spent on ciggies into a box on the mantelpiece, said she was saving up for something nice for the lad at Christmas. Then her George had his do with the Jam ladle, and she started smoking again. Little Walter got a chocolate smoking set in his stocking.

Auntie’s alternative revolution: Instead of giving up a pleasurable hobby, why don’t you just revolve to share the joy, and give a beggar or a tramp a ciggie every now and then? That way you can say that you are spreading a little happiness in the world as a side product of your filthy habit.