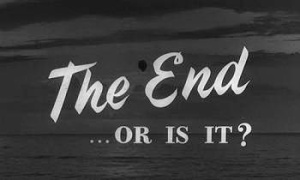 I had been dead for about 17 years before I first manifested myself through that ruddy nephew of mine. At first I was just helping him out with clairvoyant acts now and again, which was just basically him showing off in front of his mates down at the pub. I still do a bit of that now. I’ll be doing a pantomime with him this year at a proper ruddy theatre an’all, just like I did last year. But when it boils down to it, he’s still just showing off in front of his ruddy mates.
It was my idea to start writing these little homilies every day. I started writing them on the Facebook last October, with Auntie Doris’s Guide to the Zodiac, and after that I developed a taste for the writing, so I carried on with it. My ruddy nephew thought he was onto a winner. After a few months he decided that I was too good for Facebook, so he starts having them put on what he calls a “blog” on the WordPress, and by then he was pushing me to write 500+ words a day. But do you know what? I ruddy enjoyed the discipline. And so did he. Although part of his discipline was wearing a pair of my old tights to help him “summon my spirit” even though if I have told him once, I have told him a hundred times that he doesn’t ruddy need to. The filthy so and so.
Any road. I have now been producing an article a day for a year. And it is time to stop. No more daily homily from me. I have had enough of it. All things must pass. But don’t go thinking that you have heard the last of me. Ohh no.
Michael’s idea was that he would collect all my little homilies and then try and get them published under a title like “Auntie Doris’s Almanac,” and then, with my help he would become a world famous writer. But as things developed, we both changed our minds. That’s why we are both comfortable with having all the articles since March on that WordPress Site where all and sundry can find it and read it to their heart’s content. And once we are not writing every day, the ones from before last March will be going up soon, so you will be able to see how much better I am at stringing sentences together than I was last October.
When I was a young lass at school, I had an art teacher called Mrs Johnson. And in one of her lessons I drew a picture of the King in his carriage in London with all the horses and soldiers and that. Some of it I copied out of a book, and some of it was out of my imagination. Mrs Johnson said that it was a vet good picture, but I thought that she was being kind. It was ok. But the horses’ legs looked a bit wrong, like they came out of the wrong parts of their bodies and were a bit wonky. The Kings fingers were the wrong size for his hand, and the wheels of his carriage were all wrong. I took it home and worked on it for three nights, rubbing bits out here and there, re drawing bits, and slowly improving it. When I took it back to show Mrs Johnson, she really did seem thrilled, and made a real fuss of me for going that extra mile, and making something that was good into something that was really, really good.
And that’s how I feel about all this writing. I’m not letting my ruddy nephew waste it by publishing something that’s only half polished. And that’s the main reason that I am not going to write daily homilies any more.
Here’s the plan. Me and Michael are going to put in some real work on “The Auntie Doris Years” from 1900 to 2000. Expanding them and filling in more detail about the history involved, both the textbook history and the stories of how me and my family responded to it. Its not going anywhere to be published until I have all the horses legs, the kings fingers and the undercarriage worked out properly. Then we will see what happens.
I’m not leaving the ruddy internet alone completely though. Theres still about 28 Tarot Cards to do, and I’m not stopping the Sunday Posts until I’ve done them. And I will still be doing the occasional “Auntie Doris’s Book Club” and stuff like that. I will also be doing a regular weekly post about how the work on the other stuff is coming on, without giving too much away, so that people will still want to buy it when it comes out as a book. And then there’ll be negotiating the film rights. I have thought about it, and want that Helen Mirren to play me. And Timothy Spall to play my nephew Michael. He has just the right gormless expression.
I will only be putting the writing on WordPress from now on though, and just linking to it from Facebook. I know that many of my l;oyal Facebook friends will consider this to be a bit of a pain in the arse. But there you go…. All things must pass. 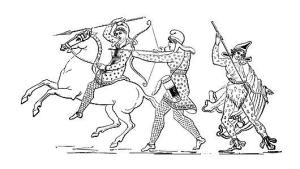 Them Amazons. The historians would have us believe that they were one of the few societies in the whole of history where women were the top dogs. As far as I can see, that just goes to show how little the ruddy historians know. Not much, that’s for sure, and the reason for that is that most of them are men. I don’t care whether a man is a professor of ruddy history or a lavatory attendant, he might think that he is in charge and in a male dominated society, but when it gets down to the nitty gritty, he is a mile wide of the mark. Who makes all the important decisions? I mean the really important decisions; Where to go on holiday? What type of wallpaper for the front room? Blankets or duvet? Frequency of Carnal Relations? You can’t trust ruddy men to judge any of those questions correctly, so they don’t, and if they try it, women set them straight, every ruddy time.
The only difference with the Aztecs is that the men actually knew that the women were in charge. They weren’t having the wool pulled over their eyes, like the men are today. I’m not sure that that would have been a good thing or not. Its easier to keep men in their place when they think that they are in charge. Them Amazon women would have had to have been a bit more forceful.
Apparently, they were ruddy forceful an’all. And as tough as old boots into the bargain. They used to chop off one of their boobs so that it wouldn’t get in the way when they were firing their bows and arrows and spears and things.
The thing with strong women is that the blokes always fancy them, and they quite often have a funny way of showing it an’all. You can understand that in a way, because some said that after an Amazon woman had had carnal relations with a man (which they reckon she only did to keep the race going) she killed him and ate him. Which is the same as what she did with the baby if it was a little lad. I reckon that was a bit extreme, but it takes all kinds.
Anyway, the king of Argos fancied The Amazon Queen, Hyppolita, but he didn’t fancy risking his neck by having carnal relations with her, so he sent Hercules to pinch her knickers for him. Filthy ruddy so and so. He didn’t even have the courage to pinch them himself. But while Hercules was unpegging them from the washing line, he knocked over some milk bottles, Hippolita came out to see what all the fuss was about and in the chaos, she ended up getting stabbed through the ruddy heart. Maybe if she had had both of her boobs, they might have cushioned the blow a bit.
Any road, the King of Argos got his knickers, and personally I hope he choked on the ruddy things. These days, his descendents run the Argos shops where you can walk in and buy stuff straight out of the catalogue. The descendents of the Amazon women don’t have any shops, they just sell stuff on the internet. It’s a far cry from those days where they were all warrior women. They even have men working from them, and the lasses can keep both of their boobs. All things must pass.
Follow Auntie Doris on WordPress.com