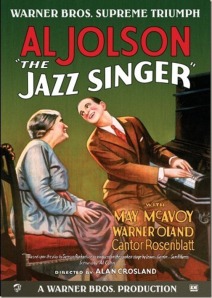 I have already related the story of how when talking pictures started in 1927 my mother ended up throwing a King Edward potato at my fathers head, and after that his personality was changed forever. Perhaps the talkies changed everybody else as well. For a start, they gradually led to the American accent becoming popular with soft beggars who should know better from Lands End to John O’Groats, despite the best efforts of people like Gracie Fields, Fyffe Robertson and Cheryl Cole. But the main thing the talkies did at first was to change the lives of those poor stars of the silent cinema who were discovered to have funny voices, or be unsuitable for the new style films in other ways.

Douglas Fairbanks was one of them. He starred in loads of swashbuckling epics of the silent era, including “The Mark of Zorro” and “The Thief of Baghdad.” Jutting out his chin, he would save the heroine with a flourish of his sword and a flash of his eyes. But when they recorded his voice for a talkie, he sounded like ruddy Kenneth Williams with a lisp. Another one was Mary Pickford, the “Girl with the Curls”, who starred in silent films such as “Little Lord Fauntleroy”, “Pollyanna” and “Rebecca of Sunnybrook Farm”. Unfortunately her voice sounded more like a female impersonator than an actual female, and she whistled through her front teeth every time she did an “S” an’all. Lillian Gish, another bonnie lass, actually had a lovely voice, but she was no good for the talkies on account of the fact that she was incredibly flatulent, and couldn’t get through a scene without it being punctuated by loud exclamations from her arse. In later years they were able to edit sounds like that out in post production, but by then, it was too late to save her career. Besides, she had inadvertently followed through on the set of her last silent epic (ironically called “The Wind”) and completely ruined an expensive silk dress. From that day on, her co-star, Montague Love never tired of telling the tale of how he somehow managed to get shite all over his fingers. The offers of starring roles dried up. Strangely enough, I understand that even today in Hollywood, the act of messing yourself during a film shoot is known as “doing a Lillian.” I have heard that the day after a cast party during the filming of 2010’s “The Tourist,” Angelina Jolie did a Lillian of such magnitude that Johnny Depp was physically sick and spent four days scrubbing himself down in the shower. Auntie Doris’s Pop pick of 1927: “Side By Side” by the Paul Whiteman Orchestra with the Rhythm Boys. The Rhythm boys were a close harmony group. They had a 24 year old Bing Crosby in them. I used to like Bing Crosby. But then in my day, all the women used to go for a man who wasn’t afraid to brandish his pipe.

As a librarian, my father did not take part in the general strike of 1926. He thought of himself as a man of religion, rather than a man of politics, He didn’t see any connection between the two. The Lord alone knows what he would be thinking these days, what with libraries closing left right and centre because of the need for “austerity” and a lack of care about how people might educate themselves. Then again, he wasn’t too bothered about education either, unless it was education in the will of God. He educated me and my sisters in the will of God himself, by preaching at us at home from Monday to Saturday, and by making us go to Church and to Sunday School every Sunday. He also encouraged our moral upbringing by nipping us hard on the legs every time he felt that we had strayed from the one true path of righteousness. I am sure that he was the reason that I suffered so bad with my veins in later life.

Anyway, whether he supported it or not, the general strike was a big feature of 1926. Another example of the working people of Britain attempting to earn a decent living and being slapped down by the ruddy Tories. That sodding stupid rag the Daily Mail was in the thick of it as usual an’all, writing their usual tripe about Communist plots to overthrow the government. They took a bit of a knock when the Print Workers refused to print it. The prime minister was spluttering about the liberty of the press and free speech. I wish they had closed it down forever, and I’m not even a communist either, I just don’t like people who tell fibs, particularly rich people who tell fibs in print, and ruin honest people’s lives by doing it.

George V wasn’t too pleased either. Of course, he couldn’t have a direct shot at the Mail, what with him being the King and all that. But He did say that before anyone started having a go at the strikers, they should try living on their wages. A bit rich for the ruddy King, but his heart was in the right place. The way I see it, the Royal Family can’t help being the Royal family, but Tories could try and stop being grasping so and sos. What happens when a member of the Royal family starts talking sense? They make him out to be a bumbling idiot. Look at Prince Charles. Anyway, the strike came to nothing really. It only lasted ten days. Blacklegs, the army and special constables kept things going, and the government saw no need to listen to the unions’ demands. Mines were closed. Wages dropped. Poverty continued. The nobs kept their riches. The Daily Mail continued to support them. The Jarrow hunger matches were ten years away.