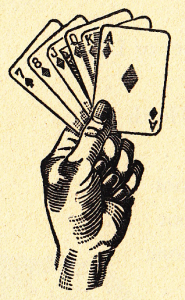 I promised that I would explain this a few weeks ago, and my words were met with such an overwhelming response, that I suppose that I am going to have to do it.

There are loads of elaborate ways of telling peoples fortune with cards, tarot or not. You can lay them out in circles or in crosses, use ten, twelve or fifteen cards. Trust me, I am experienced in this. If you are learning the skill, the best way to go is with a simple three card reading. You draw them one by one and show them to the person one at a time whilst telling them a little story.

Trust me. Any old story will do. You will get the hang of it, and your subject will more than likely be looking for some grain of truth in what you are saying anyway. Say it with confidence, look them in the eye, and sound sure of yourself. You can’t fail. You already have them in front of you, so to some extent, you will know what sort of stories to avoid and what sort of stories to tell, from their age and appearance.

Not that I am saying its all Hocus Pocus though. Not at all. Through this process you are acting like a skilled psychiatrist would. You are using stories to unlock the truths buried deep within their mind. You will know when you are right. You will see it in their faces. Half the time they will help you to tell the story anyway.

Tarot cards are easy. They have little stories on them already. But have you seen the price of them these days? Twenty or thirty quid a ruddy pack! Wheras you can pick up a pack of playing cards in the shop on any caravan site in Britain for less than a tenth of the price.

You have to know your stories though, but don’t worry, it isn’t as hard as it sounds. You start with your own system. Something that works for you. Something that you can easily get started with under the pressure of a reading. Here’s my simple system.

Each of the suits represents a theme. Make it simple and easy to remember.

Then each of the numbers and picture cards represent some variation within that theme.

An ace means one person. A two means a couple. Three is a crowd. Four is a warning (like they shout in golf before they hit the ball) Five means a favour (the cockneys would call it a fiver) Six is an illness (sicks) Seven means a reckoning (If you “get seven” someone “gets even”) Eight means satisfaction (you are satisfied when you have “ate” your dinner) Nine means a denial (from the German “Nein”) Ten means plenty. The Jack is a Knave, a mischievous rascal and a trickster. The Queen is a powerful woman. And the King is a powerful man. If you leave the jokers in you can call them fools and weave some idiocy into the story.

And that’s it. If you learn whats in those two paragraphs you can tell anyone’s fortune with a bit of practice.

Have a go at learning either my system or making your own up. Next time I will run through a simple reading with you, and show you how I would do it.

You might find this website useful if you can’t find a pack of cards in the site shop.

One thought on “Auntie Doris’s Secrets of the Mystics #2: Telling a Fortune with Ordinary Playing Cards.”