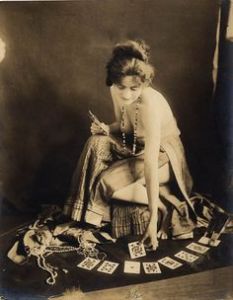 My nephew did one of them balls ups last week. He put this week’s tarot card on the internet as well as last weeks. He deleted it when he found out, and set it to re appear at the usual time, but still, some people read it early. Any road I’m not going to go on at him, because he has had a rough time lately. What I am going to do is add this little homily to give people something new to read, and get things back into step.

I need to keep my friends on here, because I well know that there are those who say that Tarot reading is a load of tripe. “It’s all Mumbo Jumbo” they say, “performed by con men and spivs and crooked old woman who are only after your money.”

Believe me, gentle reader, I am not after your money. We deceased people don’t need it. My nephew would snatch your hand off if you waved a fiver at him, but that’s his ruddy business. I don’t care about money at all. I look upon my power as a gift and want to help as many people as I can with it.

Those same people who doubt the power of the Tarot would say that plenty else was a load of tripe an’all, things such as clairvoyancy, reading the bumps on people’s heads or the lines on their hands. There are even some people who would deny the truths that can be seen by a skilled teabag reader.

I know that you are not one of those people. You wouldn’t have read this far if you were. People like that might as well say that there is no truth in the teachings of Jesus, Buddha, Patience Strong or any of the world’s other great religious leaders.

Leave that sort of talk to the likes of Richard Dawkinson and his ilk. They haven’t got the brains that they were born with. They have lost their sense of childish of wonder and probably had their minds soured by man’s inhumanity to man, or some such lark.

Any schoolboy knows that “there are more things on Heaven and Earth, Horatio, than your one eye could know”, as Oliver Hardy said to Admiral Lord Nelson after kissing him in his Golden Hind quarters.

And scientists are only just beginning to comprehend that over 90% of the human brain has unfathomable powers and peccadilloes that defy logical explanation.

And the marvel of the human brain is its limitless imagination, its ability to enjoy and understand stories, to make sense of them and to empathize with the characters described in them.

And the Tarot works as a result of all that. The lass who drew all those pictures was a real life pixie, working under the instructions of a proper wizard. And together they created a series of images that tap into the depths of your psyche and release special energies through the power of imagination and storytelling.

Someone like me doesn’t really need a tarot pack to do it. As I have said before. I can tell your fortune from your used teabags if you want. But with a little practice most people could learn to tell a fortune from any pack of cards, including ordinary playing cards, Happy Families, Old Maid, Top trumps, Poky Men or Yogi Oh. (Whatever they are.) I once had my fortune done with a pack of Brooke Bond PG Tips “History of the Motor Car Cards”. The old lass who did it said that I was going on a long journey by car. She was right an all. Me and Raymond went to Withernsea that weekend in his Morris Marina. Mind you. We did this most weekends, and I think that her sister had a caravan near ours, so she might have had an inkling.

Any Road, if you like I will tell you how to tell anyone’s fortune with an ordinary pack of playing cards some time when I am at a loose end. It’ll only take me five minutes, and then you will be able to amaze your friends and impress the opposite sex. If that’s the sort of thing you would use special sacred powers for… You filthy so and so

4 thoughts on “Auntie Doris’s Secrets of the Mystics #1: More Things on Heaven and Earth”