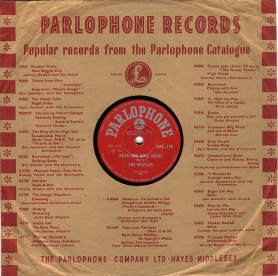 I never got on with them ruddy compacted discs. They were a right pain. I could never get the ruddy boxes open without snapping them, and then if I did get the box open, trying to get the disc out from that little plastic circle it was fastened to was just as ruddy hard. And As far as I was concerned, the music didn’t sound any better. Some people said it was, but I couldn’t tell the ruddy difference. Not even when I had my hearing aids turned up as far as they would go without whistling. No as far as I was concerned those compacted discs were as big a con as the new money. Just a way to sell people records that they had already got, at three times the price that they paid for them in the first place.
And before them they had the tapes. Cassettes and them eight tracks things. They were a ruddy stupid idea too. They used to get all taffled up and fasten themselves inside the workings of the tape player. My Raymond bought one because he thought it would be good to tape his own voice. Don’t ask me why. Men get these ruddy ideas into their heads. He only ever recorded himself saying things like “Hello… This is Raymond Speaking!” a few times before he got bored of the idea or the tape got all taffled up in the workings of the machine. He even taped my voice once. While I was talking to him from the kitchen, “You ought to be coming in here and giving me a hand with all these pots… doing something useful instead of messing about with ruddy silly gadgets all day. This beef stock is dried on to the jug rock hard. Mr Bisto will be rolling in his gravy…” It didn’t sound like me though. Raymond said that was because I was listening from outside my head rather than inside it, where I normally listen to myself from. I’m not so sure. It sounded like him pretending to be me.
Any road, I didn’t reckon much to tapes. And I didn’t reckon much to those vinyl records either. They were all right after a fashion, but you only had to leave them too near the fireplace and they got all warped and then you couldn’t listen to them properly without feeling seasick.
No, as far as I am concerned the only format for listening to music was the old 78rpm shellac. Shellac is a wonderful substance. Apparently it comes out of a beetles arse in India. And all the record companies used to send people out there to collect it. Regal Zonophone, His Master’s Voice, Parlophone, Homochord, they all had agents out in India looking after beetle farms to collect the precious Shellac which brought music to the masses.
As far as I am concerned there ought to be a national Shellac day, and pop groups ought to be queuing up to release their records in the good old shellac 78rpm format. Recorded music has never sounded better since. They still made them in Britain well into the 1950s, and in india, they carried on beyond that, with many of the Beatles singles released on Shellac. Imagine that, the beatles played on stuff out of beetles arses.
Nowadays its all these virtual Mp3 records, there might not be any hiss or crackle, but as far as I am concerned there isn’t a lot of soul neither. Give me King Oliver and his Creole band on 78 any time. Its just as if you are standing in the room with them, and a huge bowl of rice krispies snapping, crackling and popping. There’s nothing to compare these days. Its sad… but all things must pass

2 thoughts on “Auntie Doris’s All things must Pass #8: Shellac”