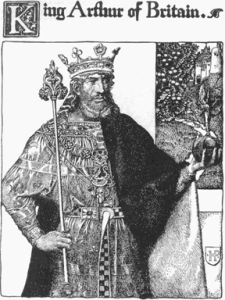 “Don’t let it be forgot that once there was a spot, for one brief shining moment, that was known as Camelot” That’s what it said in the song any road, even though the historians say that there wasn’t ever such a spot. Ruddy historians, messing up our dreams and letting facts get in the way. But, as I have said before, and shall say again, if you can imagine something then it must exist somewhere in an infinite Multiverse. So there! Its proper quantum physicists who say that, and they’ve got Bachelor of Science certificates and everything, so the historians will have to either like it or ruddy well lump it.
Whether you believe in it or not, Camelot is a lovely idea. A place where everything is good, from the weather to the social policy of the ruling classes, which aims for the establishment of a world without greed. A place where might stands up for what is right, rather than might being right just because it is a lot ruddy mightier than anyone else. Camelot!
It must have been tremendous to be King Arthur, having a wizard for a personal friend, and a magic sword given to him by a woman who lived in the bottom of a pond. Not any old king has stuff like that. But then Arthur wasn’t just any old king. He set up the round table, so that no one could sit at the head of it, and everybody had an equal say in making decisions. The round table was still on the go in my day. Our Madge and her Wilfrid joined it. They used to do a Christmas dinner dance at the social club every winter, and a outing to Doncaster races every summer, as well as a trip to Withernsea for the kiddies. The bloke in charge of it was a direct descendant of King Arthur himself. But unlike king Arthur he got done for embezzling the club funds and ended up doing three months in prison. Sewing Mailbags probably, on a diet of bread and water, not like thes days where they have a coloured television and a playstation three in every cell. (whatever one of them is) any road, the British Lions stepped in and made sure that the kiddies still got to Withernsea.
Some of the Americans reckon that when They had that President Kennedy, it was a bit like Camelot over there. But I’m not sure about that. That would mean that Marilyn Monroe was Guinevere and Arthur Miller was Sir Lancelot. And after he got shot near that grassy knoll JFK would have given one of his presidential aides a sword to throw into the park pond at Dallas. There’s loads of ponds along that Trinity River, apparently. But I can’t see that King Arthur would have come back in the form of an American President. He would be more concerned with returning Britain to its golden age. But don’t go thinking he has come back as That Nigel Fromage or them English Defence Britain First Leagues either. They are just a bunch of ruddy idiots. I’m not sure that King Arthur will ever come back and re establish anything. Those days are gone. All things must pass.

One thought on “Auntie Doris’s All things Must Pass #7: Camelot”