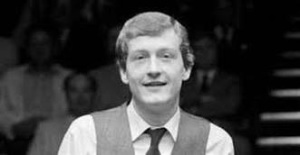 They used to say that Steve Davis was invincible. Well, Invincible at playing snooker any road. He was the world professional  champion six times in the 1980s. They used to say that if anyone could pick a ball out of baulk by going around all the cushions and finish up kissing the pink whilst avoiding the brown, it was Steve Davis. He was a more than competent potter, but his strength was in his safety play. He liked to play it safe did Steve. Some people used to go as far as to say that he was boring. The snooker world is well known for its irony, so they used to call him “Interesting Steve Davis.”
He was a completely different kettle of fish to that Hurricane Higgins, who would go smashing his balls around like a bull in a ruddy china shop, with no sense of caution at all. Higgins’s balls might have dropped, he was no choirboy. But he took it too far, he did drugs and booze and snapped the filter tips off his cigarettes. And that lifestyle caught up with him. All his teeth dropped out and he ended up as thin as a rake. He lost all of his snooker money and dropped dead in poverty, to be buried in a pauper’s cue case. All things passed for the Hurricane Alright.
But I almost feel sorrier for Steve Davis. At the height of his powers they thought that he would go on and on and on, competently potting his way to world championships well into his sixties and seventies.
After all, until Steve came along, snooker was an old man’s game. All the world champions before him had been old men. Like his dad, Freddie “Parrot Face” Davis, his uncle Joe Davis, and his uncle’s brother in Law, George Davis (who was innocent) Steve was a child prodigy of the snooker world, an enfant terrible, who took his fist world championship at the tender age of 23 and a quarter. They said that he had an old head on young shoulders. Whatever that was supposed to mean.
But in the end, he became a victim of his own success. He had made snooker fashionable, Even people like my Raymond’s little brother Cyril had bought themselves cues. There were younger men than Steve queuing up behind him. Or cueing up behind him, or something. He had to be looking over his shoulder. And when you are lining up a tricky shot at a snooker table, it is fatal to be looking over your shoulder. Well, if not exactly fatal, it doesn’t do your game any good. It wasn’t long before Steve would end up with egg all over his face whilst he was trying to kiss the pink. Brown egg an all.
And now he is reduced to being a television “expert”, giving his opinion whilst other, younger spottier men play snooker even better than he does. Like that Stephen Hendrix, from Scotland, and people from even more obscure countries than that. Like China, and places, where they had never even heard of snooker when Steve Davies was the champion. Poor Steve. He is just a talking head. An old head on old shoulders. A man who understands more than most that… All things must pass.