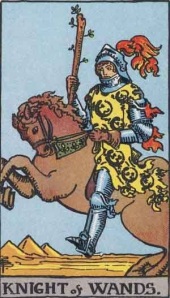 The knight of ruddy wands. The height of virility. Look at his rampant horse rearing up. I once went in a pub called the Rampant Horse. Some ruddy distant relative of my Raymond had a birthday party in there. It was full of young lads rearing up all over the place. Filthy little so and so’s. And they didn’t even do sherry behind the bar. I didn’t stay in there for long. I can tell you. It had a big picture of a rampant horse outside an all. Properly rampant it was, like it was stood upright on two legs. Some filthy minded individual had drawn something rude on it with one of them aerosol cans. Polluting everybody’s minds and the ruddy ozone layer into the bargain an’all.
And that’s the Knight of wands for you. Virile, and rampant, and capable. But ruddy immature and filthy minded.
And he’s gone to ruddy Egypt an’all. Look! You can see the pyramids in the background. But you can bet that he hasn’t gone there to study the tombs of the sodding pharaohs. Oh no. He’ll have gone on one of them “Club carnal knowledge2 holidays, hoping to have it off with a load of young lasses, whilst taking drugs and listening to throbbing ruddy music more than likely. That’s what all the young lads were after in the Rampant Horse. Them that wasn’t adding their artwork to the sign outside, any road.
The only difference between the Knight of Wands and the young lads these days, is that nowadays lads are not as good at horsemanship. Mind you they are still ruddy show offs. Popping wheelies on their mopeds all over the shopping centre and generally making a ruddy nuisance of themselves.
I would advise you to steer clear of people like that, and if you are one of them, get yourself a sensible hobby, like normal men do. Like do it yourself or gardening, my Raymond was always doing himself in the garden shed. Or find yourself a nice young lass and settle down.
Four things that you might do this week. (i) Do a bit of Egyptology. There’s plenty of websites that will fill you in with all the information. I have even written little homilies on Howard Carter and the Pyramids myself. We can learn a lot from the ancient Egyptians. People don’t develop the skills and ingenuity to pull a corpses innards out through its ruddy nose without being ruddy clever beggars do they? (ii) Go and feed a horse. Yo cant be that far from a stables, horse farm or a gypsy site. They like apples, carrots and sugarlumps. But don’t stand behind one and cough loudly all of a sudden. My Raymond’s brother John did that once and he had to have his jaw wired up for six weeks afterwards. (iii) Go to the pub, but choose a nice one, where you can get a decent meal and a glass of sherry afterwards. And no defacing the sign outside. You are better than that. (iv) try and have a pleasant, quiet week, without too much excitement and showing off. Nobody likes a ruddy show off. I keep telling my nephew Michael that. The trouble is, it goes in one ear and out the other!