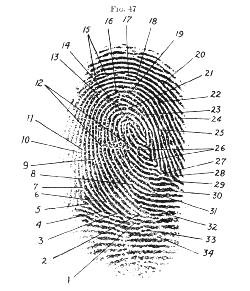 Technology moves ruddy fast. It always has done to be honest. 1902 was a bad year for criminals, because in that year technology had advanced to the point where it was possible for the police to pinch a burglar using nigh on invisible evidence that he had left at the scene of the crime without even realising he had done it. Fingerprints!
There was this bloke called Harry Jackson, he was an old lag. But as they say, he had kept his head down and done his time, and once outside, he was going to go straight; make an honest living for himself. The thing was, it was hard for a bloke with his reputation to get himself a job. So he had to do one or two little burglaries to tide him over whilst he was looking for work.
One day, he was walking through a posh neighbourhood, just looking through the windows, as you do, when he noticed a billiard table. “Balls” he thought to himself. “I’ll have them” The landlord down at the Red Lion was fond of his billiards. He had heard him say that he had clattered one of his balls so hard against the back of a pocket that he had cracked the ruddy thing. Maybe, Harry thought, if he turned up at the bar with a few spare balls he might earn himself a few pints, or a few bob, or even a job!
The window was open, so he climbed in, and then he wished he ruddy hadn’t because he got paint of the windowsill daubed all over his ruddy trousers. Still, there was nowt to be done about that now. So he pocketed the balls and scarpered. But he had left fingerprints in the wet paint!
In them days fingerprints was such a new science that they had to be that ruddy obvious for the police to even think about using them. They didn’t start “dusting” for them until much later on, so unless they were plain to see, in blood or paint or shite or something, they never bothered with them. Harry’s fingerprints were ruddy obvious. And they had them on file from the last time they pinched him.
He became the first man in Britain to be convicted on fingerprint evidence alone. They would have been able to use his painty trousers an’all, but when they arrested him his pants were spotless, but there was “a distinct smell of turps about his person” They never recovered the balls though. Jackson took the secret of where he had hidden them to his grave, and left it there, buried just under the surface, so he could dig it up when he got out of prison in 1905, (with good behaviour).
1902 was also a good year for the sales of gloves.
Auntie Doris’s Top Hit of 1902 “Land of Hope and Glory” by Clara Butt. Some people think that it is racialist to like this song. Its ruddy not! Besides, its Edward Elgar isn’t it. Any Road, as far as I’m concerned anyone can have a bit of hope and glory in Britain, no matter where they come from.