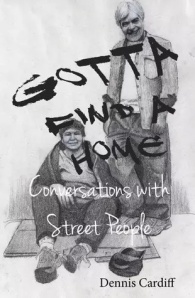 I enjoy reading Dennis’s stories on the WordPress. Not that what he writes are exactly stories. They are all true. The people who he writes about actually exist, on the streets in his home town, in Canada, and he actually does spend his dinner breaks as well as time on his way to and from work having conversations with them, and helping them out. Even though they are all alcoholics and drug addicts and most of them have been in and out of prison for thieving and violence and stuff like that. That’s part of what makes their stories so interesting. Most people would walk straight past them and try and avoid eye contact not many would hand over any money, and fewer still would get into conversation with them.

But Dennis does. At first I thought that he was one of those born again Christians. But when I read his book I found out that he is more interested in Buddhism and Eastern Philosophy, and that is what has led him to taking an interest in these people. But it’s more than just an interest. You can tell from his writing that he really likes them, and really wants to help them be seen in a positive and dignified light.
I started to like them a bit too, through his book, even though I would probably give them a wide berth and leave the talking to Dennis. After reading about them I might be more tempted to give them a few shillings, or something to eat. Dennis makes you see the good side of them, how they are just like everybody else, only less well off and with a few more serious problems, and how they help each other out when things are difficult.

I quite liked Joy, although I wouldn’t want to rub her up the wrong way, or she might be tempted to smash my face in, and the blokes that she hangs around with like Hippo, and Andre, and Shakes, and Chuck and Little Jake, all have their endearing qualities, even though I wouldn’t like to bump into any of them down a dark Alley.

Maybe the most interesting character of all is Dennis himself. But he doesn’t let you see much of him. I particularly liked the part where he smoked a little bit of pot, just so he didn’t look out of place, and he started to admire the long, grey hair of the man who gave him it. You wouldn’t have got me smoking that stuff, but I might have been tempted by a glass of sherry. I wouldn’t have had him gawping at my hair though. I’d have kept my rollers in and my headscarf on.

Any road, you can get Dennis’s book off Amazon if you want, (and probably other places too) and any money it earns will go towards helping the homeless people that Dennis knows. Which is useful, as it saves you flying out to Canada and giving them it yourselves, and risking being tempted by pot or sherry, or running the risk of getting your face smashed in.
I’m certainly looking forward to part two coming out.