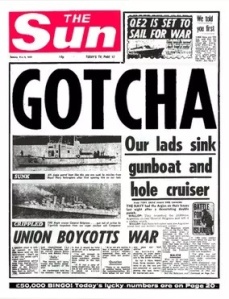 I never noticed it at the time, but now that I come to look back at the early 1980s there does seem to be something of a theme developing. Every ruddy year that that Thatcher woman was in power, things seemed to get worse. So every ruddy year she had to stage something that gave everyone an excuse to be proud to be British. She didn’t want us to be proud of British industry, because she was dismantling it, bit by bit. She didn’t want us to be proud of British arts and creativity, because it was critical of her. All she could do was wave the flag and point to some sort of historic sense of Britishness. In 1980 it was the SAS and the Iranian Embassy seige, in 1981 it was the Royal Wedding. In 1982 it was the Falkland Islands. The Falkland Islands are tiny little islands in the middle of nowhere, but probably nearer to Argentina than anywhere else.

Any road, the Argentinians went and invaded them that May, and it gave Thatcher the excuse to invoke the spirit of Winston Ruddy Churchill, and send the Royal Navy half way around the world to win them back. Don’t get me wrong. That General Garibaldi might not have been as bad as Hitler, but he was still a bad bugger, and the people who live in the Falklands might pretty much be South Americans, but they are technically British citizens. The matter needed sorting out. But it was the manner in which she did it that got my goat. All Union Jacks and Empire. Britannia Rules the waves! And to prove it, she used a nuclear submarine to torpedo a ship that had been built in the 1930s, killing more than 300 people and leaving another 700 and odd to be rescued from the water.

A couple of days later, the Argentinians sank one of ours, the HMS Sheffield. 20 men were killed in that one and plenty more seriously injured. But we went on to win the war, and the Falkands remain British even now. Altogether, there were more than 800 people killed during that war. And it only lasted ten weeks. 2,400 more were seriously injured, including that poor Simon Weston, who got his face burned off. There were less than 2,000 people living on the islands. Meanwhile in Britain, there were more than three million people without jobs. It’s a hard life.

Soldiers are due our respect and thanks. I’ve lived through two world wars, and know that I owe a lot to them. But politicians ought to try a bit harder in my opinion. Yes, I’m just an ignorant dead old woman, but it seems fairly obvious to me that there ought to be to be an alternative to large scale cold blooded murder every time there’s an international argument. And when things escalate to that state so rapidly, just because some Prime Minister wants to draw attention away from their own shortcomings, well… It ought to make your blood boil. Be thankful that you have blood to boil, and it’s not all been spilled in some battleground thousands and thousands of miles away.

Auntie Doris’s Top Pop Singalong of 1982: “Happy Talk” by Captain Sensible. I was getting to the point where the hit parade was totally beyond my understanding by now. But I did enjoy seeing that song out of “”South Pacific” gain popularity again. The bloke who sang it was a bit of a funny looking character though. I wouldn’t have trusted him much further than I could have thrown him.