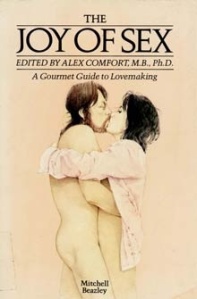 There was virtually another war going on that year, what with the troubles in Northern Ireland, the miners strikes and dockers strikes and industrial action all over the place. There were IRA bombings in England, and the ruddy Angry Brigade putting in their two pennorth an’all. And to cap that, there was international terrorism with the Red Hand Gang and Black September and all sorts of serious malarky. And in the middle of that, what does my Raymond do? He comes home one night with a ruddy book called “The Joy of Sex” by Doctor Alex Comfort M.B. PhD. Doctor Alex ruddy backache more like!
“What do you want to go bringing a thing like that in the house for?” I said to him, “You haven’t shown any interest in anything like that for ruddy years.”
“Ohh” he says, “I thought that it might help us rekindle the spark”
“It’s going to take more than a ruddy book to do that” I said “you would have been better off spending your money on a gallon of paraffin and a box of zip firelighters”
The book was full of drawings of a long haired hippie type bloke and his wife fiddling with each other and having carnal relations. They weren’t even in bed, and she still had her blouse on in half the pictures. All the chapters were called things about food an’all, with names like “starters” “main course” and “afters” and stuff like that.
I said to him, “if you think I am going to start fiddling with your ruddy feet, you can get down to the chiropodist and get those verrucas seen to for a start. And see if he will scrape the muck out from between your toes while he’s at it.”
To be honest most of the stuff in there was either ruddy disgusting or ruddy impossible. I was nearly sixty, and nowhere near as supple as I used to be, and even if I was, why would I want to get my face near some of the places he suggested. Doctor Alex ruddy filthy so and so.
Any road, I made him take it back to WH Smiths and ask for his ruddy money back. I know he probably spent it on magazines like “Mayfair” and “Club International”, and I don’t really hold with stuff like that either. But at least he used to enjoy them on his own in the garden shed without messing me about, trying to get me to fiddle with his meat and two vegetables, when I should be doing the dinner. So good luck to him.
Auntie Doris’s Prime Pick of the Pop Parade of 1972: “I’d Like to Teach the World to Sing (In Perfect Harmony)” by the New Seekers . It’s a lovely song that one, although they spoiled it a bit when that cola company used it for a sodding advert. You can teach me to sing any time you like dear, but it don’t want a tin of that ruddy stuff. I’d rather have a small sherry thank you very much. I usually sing better after a glass or two of that any road.