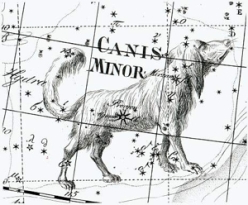 Little Dogs are generally very cute and not threatening. In latter years I enjoyed having a little doggie as a companion. First I had my Hairy Mary. My hairy Mary was incapable of hurting anyone. she lasted until my ruddy useless Raymond went and trod on her, one morning when he got out of bed without putting his glasses on. After that, and after Raymond had passed over to the other side, I got my little Madamoiselle Tuppence. My Tuppence was soft.
Both little doggies were lovely ice breakers. People would come up in the street to stroke my Hairy Mary, or to give my Tuppence a friendly tickle. Arthur Knaggs the butcher would often slip my Tuppence a bone , and Thwaites the veterinary used to rub cream into her skin to keep her moist and supple.
Canis Minorians are renowned for being cute and cuddly. But they don’t all have the advantages in life that my little doggies had. I liked to pamper my Hairy Mary, and would spend hours on the settee stroking my tuppence. I always kept a few chocolate drops in my handbag too! for the times when they might have got a bit anxious. Some little doggies that are less well looked after can occasionally turn all of a sudden and give you a nasty nip.
That never happened to me, although my Raymond used to rub my Hairy Mary up the wrong way sometimes, and that never had a brilliant outcome.
Sometimes little dogs are known as lap dogs, and this is used as a kind of nickname for blokes who will follow their wives or partners around obediently, wherever they go. My Raymond wasn’t like that at all. He might have started out with the intention of following me around, but then I would have walked past a pub, and he couldn’t always manage to do that. I wouldn’t have wanted him to be a lap dog any road. It would have got on my nerves having him clinging to my heels all day long, when I just wanted a chin wag with the girls or something.
My advice to Canis Minorians: is to try not to keep things bottled up for the sake of seeming cute and cuddly. You will eventually blow, and the result will be worse than if you hadn’t kept it all in in the first place. Talk things through before you reach breaking point and do something that you might regret.
Famous Canis Minorians: Noel Edmonds: tries to be cute and cuddly, but never go in for a bungee jump in a crate that he has organised. something is always going to snap. Marylyn Mansion: tries to look cute with all that make up, but I have my suspicions about that one… Elvis Presley: just wanted to be your teddy bear, but grew into a chubby gun toting lunatic who faked his own death. Grandmaster Flash. No wonder they banned him from the world chess championships… The filthy so and so.