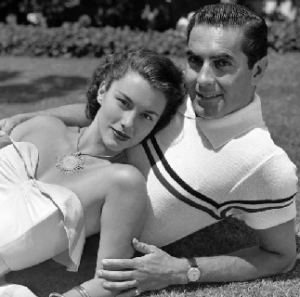 I lived with my Raymond for forty seven years. When you marry someone you are supposed to stick together “till death do you part.” I never married Raymond, neither of us saw the ruddy point, but we might as well have been married, and there weren’t many who knew we wasn’t. I stuck with him through thick and thin. Mostly thin. But there were a few thick bits an’all. He died in 1992. Three years before I did. And when I arrived on the other side, he wasn’t even there to meet me. But then, I wouldn’t have expected him to be. Till death do us part, see?
Any road, he was having a whale of a time there without me, with his own teeth restored to his head, and his youthful physique back. He had been flirting with the dolly birds he had, although the one he ended up with, Muriel Dewlap, had been in worse nick than me before she got her glorified body. I wouldn’t have imagined he would have looked at her twice whilst she was alive, nor she him, but there they were,literally frolicking, hand in hand when I saw them.
I wasn’t ruddy jealous though. All the jealousy gets drained out of you when you pass over. And besides, I had Knaggs the butcher, who had passed over in 1987. And he could get me beef dripping on the other side better than he ever could when he was running that poky little butchers shop. And that’s saying something.
When he did leave Muriel Dewlap’s glorified tonsils alone for long enough to have a normal conversation with me, we had a lovely chat about our time together in the realm of the living. We had some happy memories, and even the irritations and annoyances we caused each other seem somehow different from the perspective of the other side. We were like adults talking about the squabbles that they had as children.
Any road, He lives on his own now. Although he sees a lot of Muriel. Couples who meet on the other side don’t tend to go in for co habitation. It’s not as if they are going to start having kiddies together or anything, is it? Besides, it won’t last that long. There are plenty more nonagenarian dolly birds he has is eye on, and I’m sure there are plenty of dearly departed blokes who fancy a dalliance with the Dewlap.
He has a nice house with a gravel drive to park his sports car on. He has a snooker table in the garage, and an immense collection of gentlemen’s reading material in the garden shed. Don’t ruddy ask me why he keeps it all in there. Force of habit with men of his age, I suppose. There is a pub at the end of his road where he meets all his deceased pals and talks his blokes talk. So he seems ruddy well happy. And why not. I suppose he deserves it. He had to put up with me for nigh on fifty years.
If you are distressed at the thought of putting up with someone like me for nigh on fifty years, or need to discuss any of the other issues raised in “Auntie Doris, life on the other side” do comment below the article. I will be pleased to engage you in some quick witted banter, or point you in the direction of someone who can. Keep your chin up. Things could be worse, tomorrow i will be looking at the possibility of the dead coming back to life as zombies whose only desire is to feast on the brains of the living.

One thought on “Auntie Doris: Life on the Other Side #10: whatever Happened to my Raymond?”