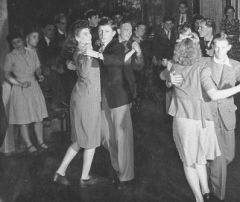 It was a Saturday night. Jackie Brewer and his Orchestra were playing at the Majestic (now a carpet warehouse). They were what you would call a Glenn Miller tribute band these days. Although Jackie Brewer didn’t look a bit like Glenn Miller. He was a lot fatter, had a lot less hair, and his skin didn’t look quite as healthy, (although they used to use make up and lighting in the films so Glenn Miller’s skin might not have looked so healthy in real life). Jackie’s Orchestra wasn’t quite as big as Glenn’s either. But the showed willing, and sounded quite like them if you closed your eyes.
They were doing “I’ve got a girl in Kalamazoo, and I did close my eyes. And then some ruddy idiot made me jump by typing me on the shoulder. I opened them, and that was the first time I saw my Raymond. He didn’t look much. His skin wasn’t as bad as Jackie Brewer’s but he was no Glenn Miller. His hair was thick with oil an’all. You could tell he was a shy lad though, and it had taken him some courage to come and ask me for a dance. So partly because he didn’t look much of a threat, and partly because I had had a small sherry, I agreed to dance with him. When we got talking I discovered that he was only 21, quite a few years younger than me. He had just finished his training, and was going to be posted to Egypt in a few days. It wasn’t hard to see that he was ruddy terrified an’all.
He told me that he had never had a girl to call his sweetheart, and that he wanted to have someone to write to whilst he was away. He had big brown watery eyes, and I couldn’t really say no. It felt like it was my patriotic duty really. So I told him that I would think about it and agreed to meet him at the Rose and Crown the next day.
I did take my soup spoon, just in case of any malarky, but I somehow knew that I wouldn’t need it. I had half said to myself that I might try one of Violet’s methods of dealing with him if anything had come up. But it didn’t, so I didn’t have to. I have always said that men have a one track mind. But when they are very afraid, (which he was what with his posting imminent an’all) they can sometimes be almost normal.
Any road, I liked him enough to agree to be his sweetheart for the duration of the North African Campaign. I even let him give me a little kiss before he left. But I never really thought that it would ever amount to much more than pen pals. Some ruddy pen pal he turned out to be. Little did I know that I would be lumbered with him for the next fifty odd ruddy years.
Auntie Doris’s Pop Pick of 1942: “Don’t Sit Under the Apple Tree with Anyone Else but Me” by the Andrews Sisters. It was under the Apple tree outside the Rose and Crown where I let him kiss me that first time. So it sort of became our song.