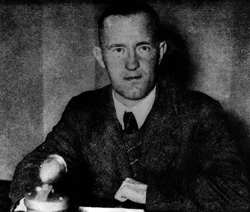 On a cold Thursday morning in January 1946 William Joyce fell, broke his ruddy neck and died. They hung him. A terrible end for a man who had only wanted to make a career for himself as a radio presenter. Personally, if we were going to have open season on hanging radio presenters, I would vote for Noel Edmunds or Dave Lee Travis, or someone like that. As the popular song goes: “Hang the DJ, hang the DJ hang the DJ…” But William Joyce wasn’t even a DJ as far as I know. And they still hanged him anyway. For making a bad radio show which was broadcast from Germany during the Second World War.

He used to broadcast to Britain, and generally tell a pack of lies about how well the Germans were doing in the war, how they were going to win it, and how we all might as well give in. As far as I can remember, nobody believed the ruddy silly idiot anyway, but he did have a comical voice, and he was a decent listen when Glenn Miller wasn’t doing a show.

When he had had a couple of shandies, my Raymond used to do impressions of him. “Germany Calling… Germany Calling” he used to say. “Doris had better watch out, because we are sending a doodlebug up her drawers. It’s going to make a mess of her Maginot line” I never actually wringed his neck, but I would have liked to.

Instead of hanging him, they should have got him to work with Tommy Trinder, or given him a part in Hancock’s Half Hour or something. I know that he had some rum ideas and that, but we did win the war after all, and I think he would have come around to our way of thinking in the end.

Here on the other side, William is still involved in Local Radio, broadcasting “Lord Haw Haw’s Happy Half Hour” to anyone who likes that sort of thing. Its all good harmless fun nowadays, In fact Winston Churchill often puts it on and enjoys

a cigar and a glass of brandy whilst he listens.

Lord Haw haw’s advice to the living: “The end is inevitable. You are going to die. And when you do, be sure to tune in to Lord Haw Haw’s Happy Half Hour – Its on the other side”