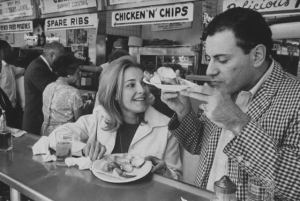 Imagine that, sausage rolls, fish, chips and mushy peas with scraps, faggots done in their own juices, pickled eggs, a nice bit of tongue, black pudding, pease pudding, Yorkshire pudding, rice pudding, semolina, sago, tapioca, all that your heart desires. Imagine eating what you want, when you want, and never putting on so much as an ounce in weight. Well you ruddy can’t. Until after you pass over to the other side.

Since I have been dead, I have had it all. The full range of Mister Kipling’s cakes (with Mister Kipling himself.. In his front room, in front of a blazing fire with the clock ticking away nicely if you’d like to know), vol au vents, profiteroles, chocolate fudge cake the ruddy lot. And I haven’t gained an inch. This is due to the spiritual nature of life on the other side. Obviously, our Michael has put on a couple of stone. And its funny watching him trying to explain to his Mrs that it was me who pinched all the chocolate Hob Nobs (and drank all the sherry).

But I suppose that you are looking for some sort of short cut that doesn’t actually involve dying. The only way you are going to get any satisfaction is by altering the terms of the revolution slightly. How does “Eat as much as you want OR lose weight” sound? The secret is to make a decision, and then stop worrying about it. Give it a few weeks, and then if you are not entirely happy with your choice, change it for the other one. Give it a few more weeks, and if you are still not entirely convinced, switch back. It worked for ruddy Lena Zavaroni. Well, not entirely. I did say a few weeks, rather than a few hours. The thing is, during those few weeks, don’t dwell on it. Write a date on your calendar a few weeks ahead and don’t fret till then. That way you will be spending the majority of your life not fretting.

Auntie’s alternative revolution: Be happy in your own skin. Take a leaf out of Gloria Gaynor’s book and say “I am what I am!” and if you feel starving hungry or fit to burst, remember : “I will survive”